About The Faithful Traveler

The Faithful Traveler is a travel series for television produced by David and Diana von Glahn. As the show’s host, Diana explores the art, architecture, history and faith behind shrines and places of pilgrimage around the world.

The Faithful Traveler in the United States: East Coast Shrines  is a 13-episode series that features shrines and cathedrals along the East Coast of the U.S.

The Faithful Traveler in the Holy Land  is a 6-episode series that explores sacred sites throughout Israel and Palestine, including Bethlehem, Nazareth, Jericho, Jerusalem, the Dead Sea, the Jordan River, the Sea of Galilee, Ein Karem, Qumran, and more.

A Papal Pilgrimage in the Holy Land  is a 3-part special that explores the important history behind Papal pilgrimages to the Holy Land, including the background behind Pope Paul VI’s meeting with Patriarch Athenagoras in 1964, and the significance of the meeting of Pope Francis and Patriarch Bartholomew in 2014.

The Faithful Traveler in Portugal  is a nine-episode series some of the many sacred sites that dot the Portuguese landscape. From monasteries and convents to cathedrals and shrines, there is a lot for the faithful traveler to see in this amazing country, beginning with its most famous—Fátima—and including many breathtaking sacred sites throughout Portugal’s beautiful cities of Lisbon, Santarem, Coimbra, Batalha, Alcobaça, Porto, Braga, and more! 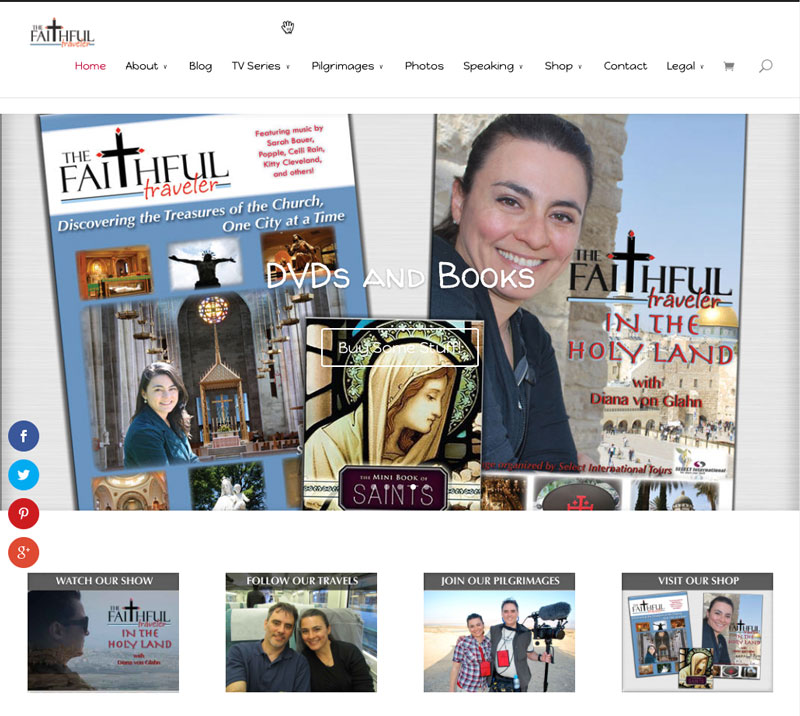 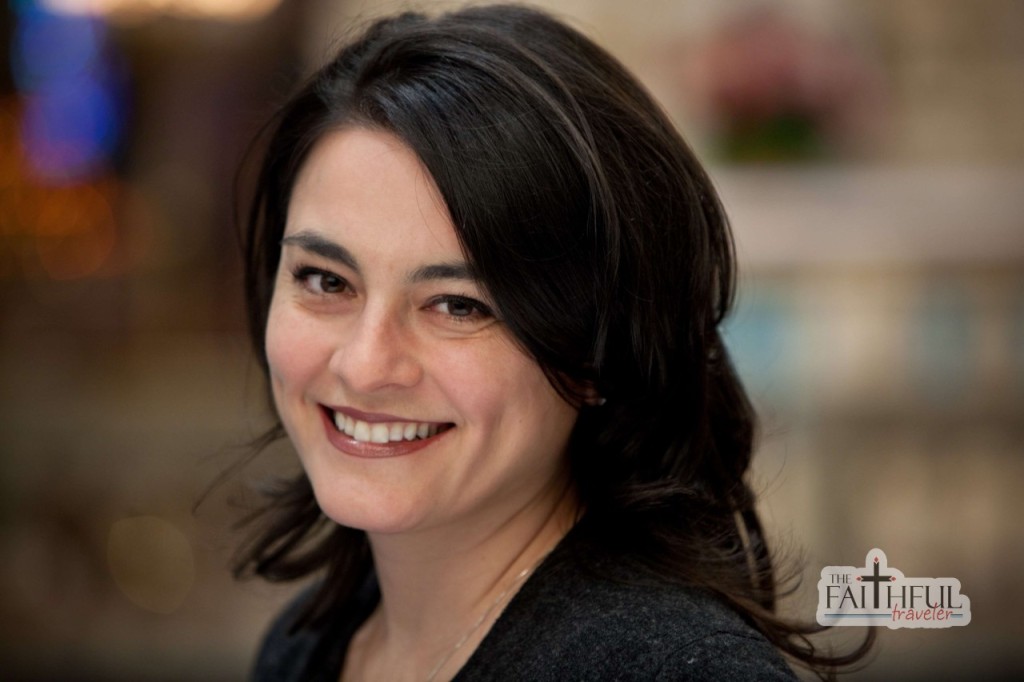 Diana von Glahn is the co-producer–along with her husband, David–writer, host, sometime cameraperson, and editor of The Faithful Traveler, a television series that looks at travel and pilgrimage through the eyes of faith. The series currently broadcasts on EWTN, and is available online. Diana explores the art, architecture, history, and doctrine behind shrines and places of pilgrimage around the world, and seeks to entice viewers to visit these spectacular locations themselves, armed with the information provided in The Faithful Traveler. For those who can’t make the travels themselves, Diana hopes to bring these amazing sites into their homes, and enable them to virtually make pilgrimage with her.

Born and raised in San Diego, Diana is the second of four first-generation Mexican-American girls. At the San Diego School of Creative and Performing Arts, she developed a life-long need for a balance of creative and intellectual pursuit. Diana earned a BA in English at Pepperdine University, and a law degree at the University of Notre Dame Law School. After a brief career as an attorney, Diana moved to New York City to pursue a career in publishing. She has been an editor for in a variety of genres, including kid’s nonfiction, graphic design, cookbooks, Catholic newspapers, and legal books. She met David in New York and they married in Philadelphia. The Faithful Traveler was born on their honeymoon in France. Diana has been visiting Catholic shrines, churches, & places of pilgrimage as long as she can remember. A lifelong Catholic, she has always loved the feeling of home that a Catholic church gives her. Through The Faithful Traveler, she hopes to share her love of and help others appreciate the Catholic faith.

David shoots and directs The Faithful Traveler.  As a convert to Catholicism, his voice is invaluable to the series, giving it the insight needed to make sense to new and on-Catholics alike.  A native New Yorker, David graduated from Syracuse University’s S.I. Newhouse School of Telecommunications. 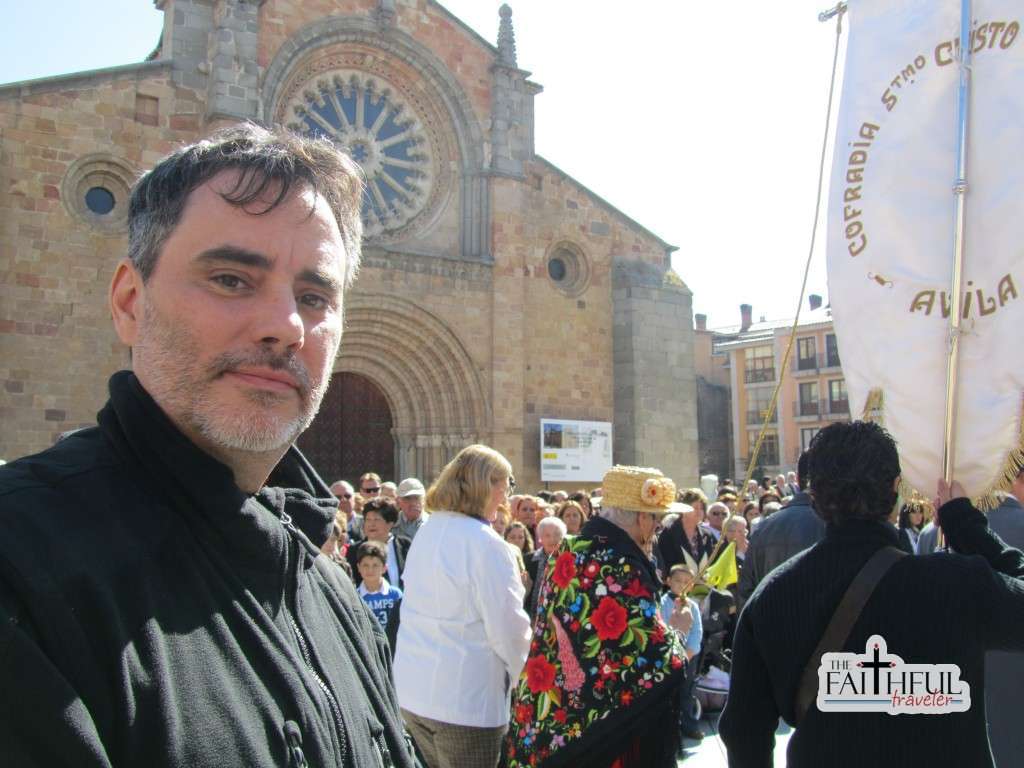 What People Are Saying About The Faithful Traveler

From the first episode, I was hooked. Von Glahn is a youthful and energetic woman and her lively faith bubbles up and carries you along as she makes a thorough exploration of the Holy Land, beginning with Mount Carmel, the Dead Sea and Cana, but it is her excellent eye that really delivers the goods. Traveling with the Archdiocese of Philadelphia’s Pilgrimage, she and her behind-the-camera husband, David, manage to balance enthusiasm and reverence, passion and prayerfulness as they bring us to the Churches of the Holy Sepulchre, the Annunciation, the Nativity, all of them bathed in very beautiful light, and filmed with a generous understanding that — as delightful as von Glahn is — the viewer wants to see what she is seeing, in as much detail as possible.
Elizabeth Scalia

That Diana … is she ever charming! Her pleasant voice lends well to the narration, and her on-camera presence truly invites you in as a fellow pilgrim along each stop. I shared many smiles and even a few tears with her. If you don’t choke up a bit during Episode 4, you might be made of stone. But, as Pope Francis might say, who am I to judge?  … my what initiative the von Glahns have! … I can’t imagine all the behind-the-scenes work it takes to get a television series off the ground. David and Diana have infused their love for the Church with their passion for traveling and turned it into a ministry. An entertaining and inspiring one at that.
Lisa Schmidt

… it is difficult to imagine a more engaging on-screen travel companion in the land of the Bible than Diana.  She has done her homework, as any good guide should, mixing a careful balance of providing information of interest to all, with offering some clarification for those who might not have heard of a particular term or concept before.  She is a charming, natural tour guide, never saccharine, and clearly enjoyed the experience – that comes through in spades during the series.
William Newton