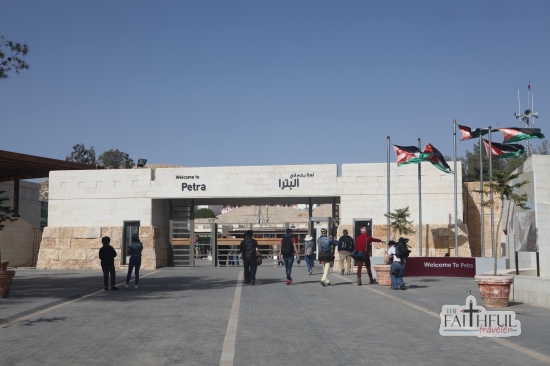 Last year, when I travelled to Jordan to film part of my upcoming series, A Papal Pilgrimage in the Holy Land,  I was not able to make it to Petra. We were only in Jordan for about 2 and a half days, really, with only evenings in Amman, and a few days trips to local sites.

But this year… this year was different. As part of the Jordan Tourism Board’s Religious Blogger Tour, we were taken to a good majority of the sacred sites in Jordan, as well as some of its biggest tourist offerings, and Petra was the highlight.

Just a week before I travelled to Jordan, I watched the Nova special, Petra: Lost City of Stone, in which people discussed who lived in Petra and how they built the many amazing tombs and sites they left behind. So I felt ready to explore on my own. While our expert guide, Ra’ed Haddad, had plenty to share with us about this amazing historic site, I was excited to catch some pick up footage for my production–and possible future productions.

We started the day early, walking from our beautiful hotel, the Mövenpick Resort Petra, to the entrance of the Petra compound.

We made our way along the long and dusty roads, horses and buggies passing us by, and guys calling out to us, “Donkey ride?” It was tempting, because, well, who doesn’t like a donkey ride?! But I was determined to experience Petra as much as I could, and if that meant blisters and failing lungs, so be it. 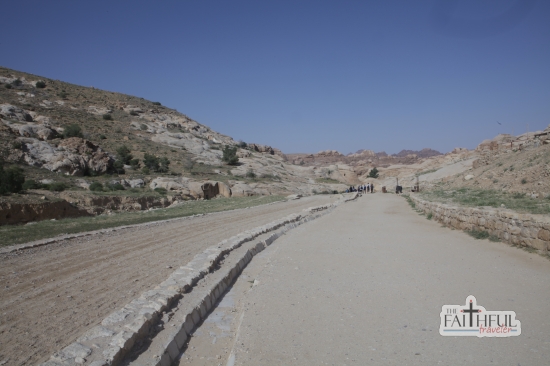 Eventually, we started to see some of the tombs left behind by the Nabateans 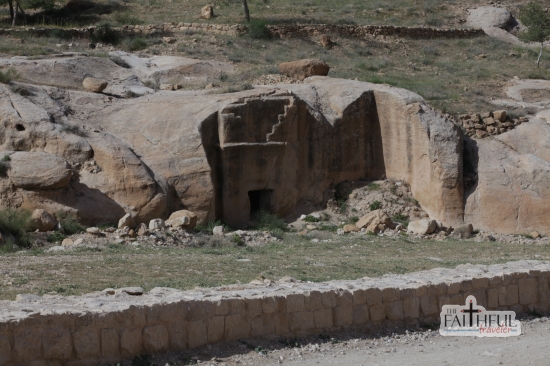 Connor Eberhart, the talented and amazing videographer hired by the JTB, and I stopped to film an ancient tribal dance

while our group went inside this gift shop to learn about myrrh (that’s Connor and his shemagh–the red scarf).

The owner of the store ran out and rubbed something fragrant on my arm, which intoxicated me all day long. I later returned to buy it and got the royal treatment (he drew kohl in my eyes and put that head thingie on me, making me look like a Bedouin).

We walked the long, dusty alleys of Petra,

half expecting Sand People to pop out and start gurgling at us.

I took a group photo, which is somewhat far away with my awesome wide-angle lens.

And Ra’ed told us amazing stories as we made our way. 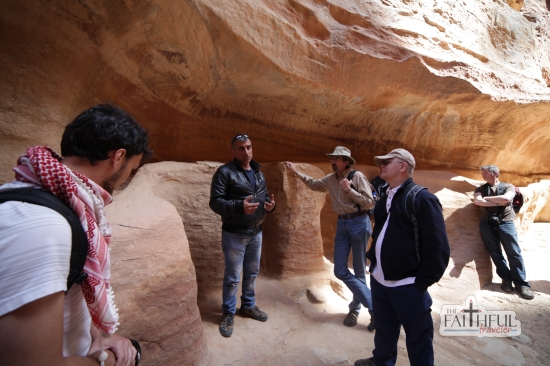 One sticks out in my mind: he told the story of Lot’s wife, and asked a question I’d never considered, did Lot’s wife really turn to salt, or was the story a metaphor? A parable? Was it, instead, that Lot’s wife, because she refused to let go of the past, became hard as stone, and salty as tears? I’m sure I’m getting it wrong, because beyond being an amazingly knowledgable guide, Ra’ed is also a poet, and I am not. But the story stuck in my heart, and I hope it will never leave, reminding me always that to hold on to anger and grudges and the past is tantamount to being turned into a pillar of salt.

Then, we finally made our way to the treasury. 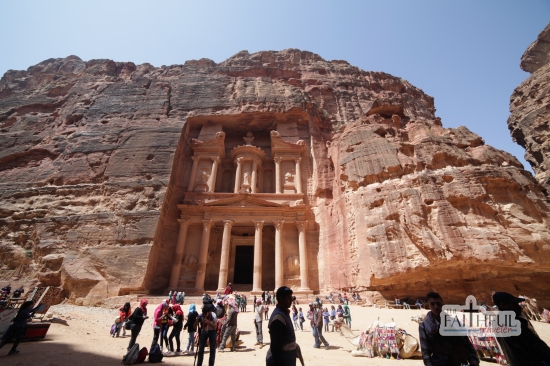 It really is amazing. People milled about everywhere, taking photos and riding camels. Here is the requisite selfie:

Our own Deacon Greg Kandra got into the fun and jumped on a dromedary himself! 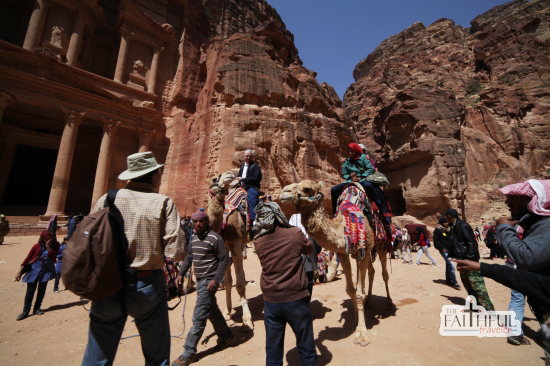 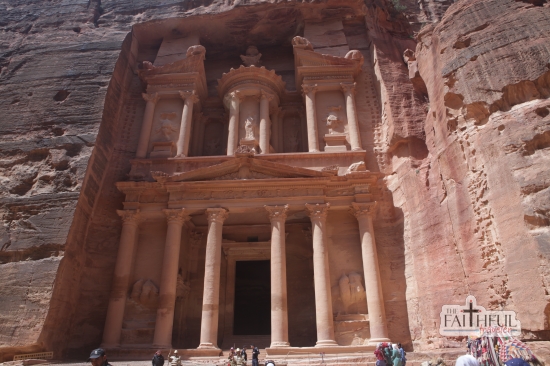 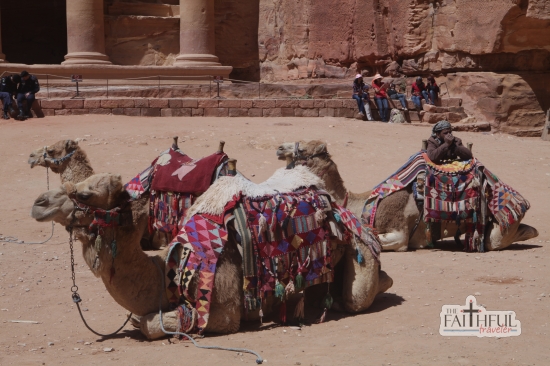 These two gentlemen told me I looked like an Arab, which pleased me. 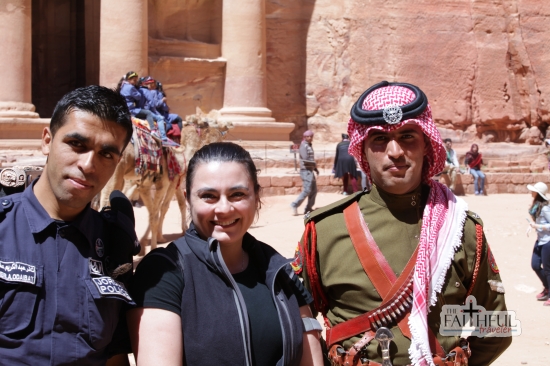 I always like looking like the locals. I guess I have that kind of “everything except Mexican” kind of face. LOL.

People love a girl with a camera, I must say. 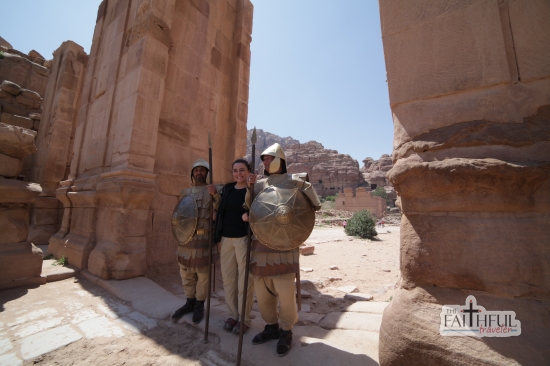 After lunch, our group splintered off into groups going different ways. Some walked back to our hotel in a leisurely manner, shopping along the way. Others took a higher route, visiting some of the tombs we passed in the hills. But Frank Weathers and I decided to make the trek to the Monastery. 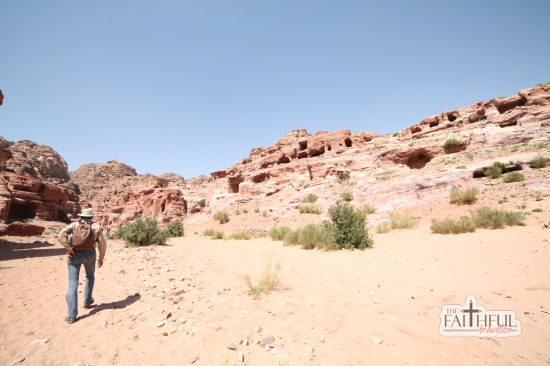 We began the 1,000+ stoney, steep steps. Frank had his backpack and I had my tripod, camera, and three lenses. I was not making this trek unprepared! 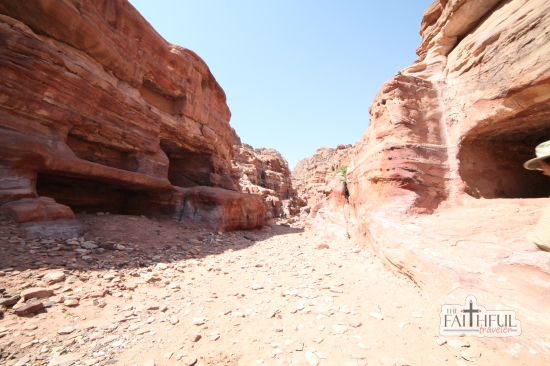 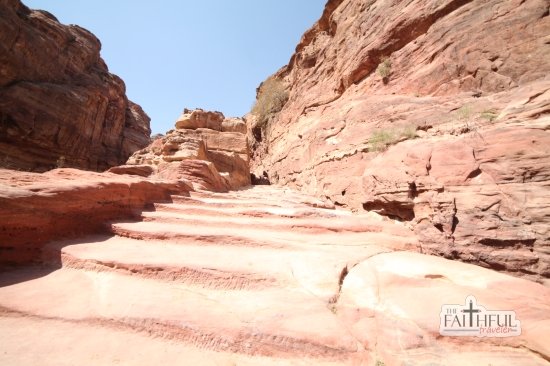 Frank, gentleman and naturally born Shepherd that he is, waited for me as I huffed and puffed all the way up the mountain.

It was a lot of steps.

But we eventually made it.

That grey band on my arm is a Bodymedia FIT armband, which measures my steps and caloric output. This is what it measured for that day:

When Frank saw this, he replied, “Moderate activity my butt!” (or something along those lines. I would have to agree with that assessment. There was nothing moderate about that climb. Or the view.

But, Frank being Frank, had to get the most out of the experience. So we went higher. (I’m not complaining. I love an adventurous travel partner!) So we climbed…

and climbed some more, until we found the “Best View”. Or, at least, that’s what the signs told us.

It wasn’t too bad.

I need to work with Frank on framing those shots…

On our way down, we prayed the rosary together, which was awesome. I even taught Frank how the Fatima kids would pray at the Cova da Iria, yelling out,

Before we left the park, I met this Bedouin, who told me he was in a Lonely Planet book.

I’ll have to look him up…