St. Matthew, Capernaum, and the Call

Our Lord summoned Matthew by speaking to him in words. By an invisible, interior impulse flooding his mind with the light of grace, he instructed him to walk in his footsteps. In this way Matthew could understand that Christ, who was summoning him away from earthly possessions, had incorruptible treasures of heaven in his gift. 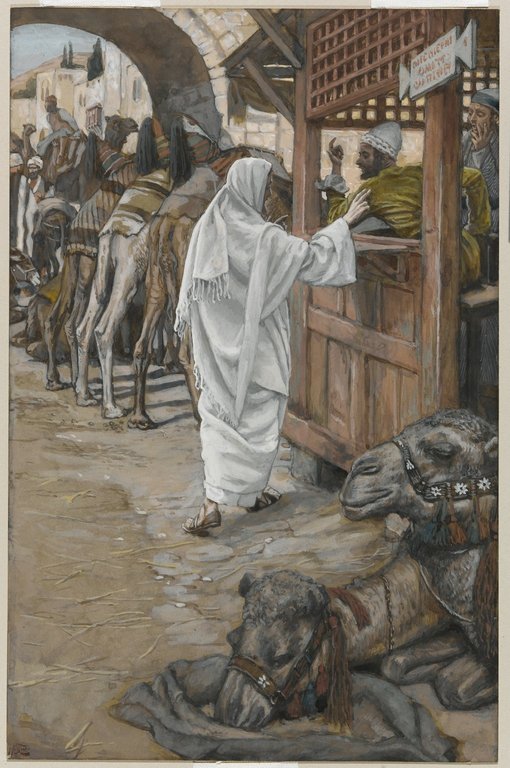 Today is the Feast of St Matthew the Apostle, the Evangelist, and the tax collector called by Jesus in his native town of Capernaum, in Galilee. The readings at today’s Mass were, I’m sure, chosen for this day because they speak so well of what must have been going on in St Matthew’s life on the day that he was called.

What must it have been like for Matthew on the day that Jesus passed by?
He’d been living in Capernaum, probably his whole life, and he got this cushy job as a tax collector in Herod’s service. Sure, a lot of people didn’t like him–it made sense. He made them pay the taxes many of them could barely afford. Maybe he felt a little guilty about it, taking money from his fellow Jews to give to Herod. Maybe he didn’t care. After all, he got to keep a little bit of it for himself, and life was good.
Capernaum was a beautiful place to live. The Sea of Galilee was off in the distance, and fresh seafood was something he might have enjoyed quite frequently. The black volcanic rock that dotted the landscape was used to build many of Capernaum’s buildings, setting them off against the blue sky of Galilee. The grounds were lush, and it was so lovely to watch from afar the storms that often raged in the middle of the Sea of Galilee. 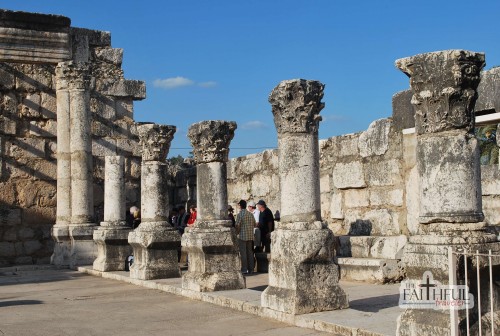 Ruins of the Synagogue at Capernaum

Then, one day, Jesus came to town. Matthew heard the buzz. This man was calling people to repent, teaching in the Synagogue, and even healing people, some of whom were possessed by demons! His fame was spreading throughout the region. In fact, just the day before, he had healed a paralytic who had to be lowered down through the ceiling of Peter’s roof! ‘That must’ve been annoying for Peter,’ he might have thought. ‘Who is going to fix his roof?’
He set off for work, that day, to his little stand in the middle of the small village. Maybe that day, as he sat in his booth, he thought about the things Jesus had been doing. ‘The man was a miracle-worker,’ he might’ve thought. ‘Perhaps he is the man of whom that John spoke, the one who was beheaded recently…’
Today’s First Reading, comes from Isaiah 55:6-9, and as a Jew, Matthew would have been familiar with it.

Seek the LORD while he may be found,
call him while he is near.
Let the scoundrel forsake his way,
and the wicked his thoughts;
let him turn to the LORD for mercy;
to our God, who is generous in forgiving.
For my thoughts are not your thoughts,
nor are your ways my ways, says the LORD.
As high as the heavens are above the earth,
so high are my ways above your ways
and my thoughts above your thoughts.

Maybe Matthew heard a large crowd coming his way. Perhaps his heart leapt at the thought that Jesus might have been among them. Surely, he had to be! Who else could draw such a crowd?!
Then he saw him. What must he have thought?
‘Is he coming my way? No! Why would he want to talk to me?! I am not worthy of his company or friendship! I’ve done so much wrong. I’ve cheated my fellow Jews! I’ve taken kickbacks! I’ve ignored the poor. This is a holy man. What would he have to do with me… but he is coming my way! Oh, what will I do? What will I say? What will he say?’

As Jesus passed on from there, he saw a man named Matthew sitting at the customs post. He said to him, “Follow me.” And he got up and followed him.*

Just like that.
St John Chrysostom, in his Homilies on the Gospel of St Matthew, says,

We see by the prompt and complete obedience of Matthew, who left all his worldly possessions in an instant, that the Lord had called him at just the right moment.

God has perfect timing. I love it.
In today’s reading from In Conversation with God, one of my favorite collections of spiritual readings, the author states,

The time and place the Lord selects to ask for complete dedication are foreseen by Divine Providence and for this reason are the most opportune. At times Christ calls someone in the prime of youth. For such a person then is the best time to respond. For others Christ manifests their vocation during adulthood. He makes use of colleagues at work, family ties or other social dealings to reveal his purposes. Along with the tremendous grace of seeing our vocation God grants the strength to respond quickly and to be faithful to the end. If a person says ‘No’ to the Lord with the idea of saying ‘Yes’ at a time perceived to be more suitable, it can happen that another such occasion never comes up. Furthermore, the Lord may not lovingly knock a second time. All resistance to grace hardens the heart. St Augustine describes very succinctly the urgency with which we should respond to God’s gift, to his passing close by where we are on the road of life: Timeo Jesus praetereuntem et non redeuntem, ‘I fear Jesus may pass by and not come back’.

Wouldn’t that be the worst thing ever–Jesus passing by and never coming back?
Fortunately for Matthew, he either had the clarity of mind or his instinct was spot on: he dropped everything and answered the call. “His response was quick and generous,” as the author of In Conversation with God states.
That line stuck with me this morning. It made me think: is my response quick and generous? Or am I begrudging and slow? Lazy to answer the call to grace?
If I were honest, I’d have to say it depends on the day. But most of the time, I do think that God has given me an enthusiastic and generous heart, one that is happy to give, even when it is unappreciated or unwanted (which happens way more often than I’d like).
Another thing I wonder about St Matthew’s call is whether he regretted the years that he had wasted before answering Jesus’ call? Because that is totally something I would do. I mean, ok, Jesus hadn’t called him before he actually called him, but for those of us who come after, we’re called every day. I think St Augustine puts words to this regret so perfectly, when he says,

Late have I loved you, O Beauty ever ancient, ever new, late have I loved you! You were within me, but I was outside, and it was there that I searched for you. In my unloveliness I plunged into the lovely things which you created. You were with me, but I was not with you. Created things kept me from you; yet if they had not been in you they would have not been at all. You called, you shouted, and you broke through my deafness. You flashed, you shone, and you dispelled my blindness. You breathed your fragrance on me; I drew in breath and now I pant for you. I have tasted you, now I hunger and thirst for more. You touched me, and I burned for your peace.
from The Confessions of Saint Augustine

It’s funny how the devil tries to get at us, no matter what side of the fence we’re on. “You’re an unrepentant sinner? Great!” he must say. “Keep on keepin’ on! You’re mine!” After our conversion, he just turns the tables: “Oh, you’re reformed, huh? Well, how about a little regret that it took you so long, you horrible thing, you!”
That, I think, is why today’s Second Reading, from Philippians 1:20-24, is so perfect.

Christ will be magnified in my body, whether by life or by death.
For to me life is Christ, and death is gain.
If I go on living in the flesh,
that means fruitful labor for me.
And I do not know which I shall choose.
I am caught between the two.
I long to depart this life and be with Christ,
for that is far better.
Yet that I remain in the flesh
is more necessary for your benefit.

Essentially, the take away, at least for me, is that if we let Him, God will put us where He wants us to be, when He wants us to be there. All we have to do is trust in Him and answer the call.
The actual city of Capernaum is, today, a city of mostly archaeological ruins that are fascinating for we Christians who come long after the first calls that took place in this city. Think about it: Peter and Andrew were called here. Matthew was called here. James and John were called here. And let’s not forget that, during the great majority of His ministry, Jesus lived here. It’s a great place to visit, to reflect on the lives of the disciples, both before and after they answered His call, and to reflect on how we respond to that call, as well.
Today, let’s keep Capernaum and St Matthew in our hearts, as we ask God to enable us to be fast and generous with our response to His calls to grace. Wherever and whatever they may be.