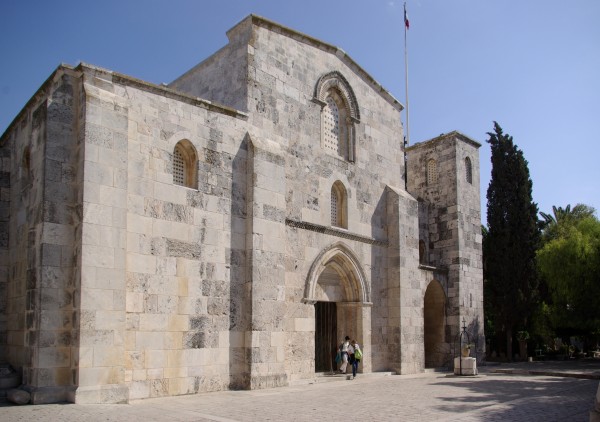 This post first appeared at Roman Catholic Spiritual Direction, where I have been invited to blog once a month on Catholic travel. If you’re not familiar with the site, check it out! They have some awesome bloggers there, with great info on a variety of aspects of practicing and living our faith!

It’s been a few months since I last wrote. Those who saw me recently on EWTN’s Life on the Rock or who read my blog know that my husband David suffered a heart attack on Mother’s Day, just nine days before we were supposed to fly to the Holy Land to document Pope Francis’ Holy Land pilgrimage. He’s fine, thank God, and is recuperating well, but it did throw our lives into disarray, and my posting on this blog suffered as a result. I am grateful to Dan and Liz for their patience and prayers. At David’s insistence, I went to the Holy Land without him and, God willing, hope to release our program about the Pope’s pilgrimage sometime in the Fall.

The Church of St Anne is a really amazing church for many reasons. It’s located in one of the most beautiful parts of Jerusalem that I remember: a lush garden in the Muslim quarter, right next to the ruins of the Pools of Bethesda. It’s a wonderful place to visit, as the gardens provide pilgrims with a refreshing place to sit and relax in the shade and enjoy the rompings of the many feral cats that live in the gardens.

Built between 1131 and 1138, the Church of St Anne is the best preserved Crusader-built church in all of Jerusalem. It’s built in the Romanesque style, with thick walls and arches, and it has some of the best acoustics around, especially for Gregorian chant. Step inside this church, and you’re bound to hear a group singing a song and enjoying the wonderful echo.

Unlike most churches in Jerusalem, the Church of St Anne was not destroyed after the Muslim conquest of 1189. Instead, the church was turned into one of the city’s most prestigious schools, as can still be seen by the inscriptions above the main entrance. Eventually, the building was abandoned and was given to the French. Today, the French White Fathers maintain the beautiful church and grounds.

The Church of St Anne is built atop caves that are believed to have been where Saints Joachim and Anne lived, and where the Virgin Mary was born and lived as a child. They are wonderful places to visit and give thanks for our Blessed Mother and the gift she brought to the world.

You may be wondering, “Didn’t Mary live in Nazareth, where the Angel Gabriel greeted her in her room?” Tradition tells us that she did, and I talked about that home before, in March, at the Basilica of the Annunciation. While the Bible doesn’t tell us about Saints Joachim and Anne, tradition and apocryphal literature tell us much of what we believe about today’s saints and the Blessed Mother’s youth.

The Protoevangelium Jacobi (or Gospel of James) is believed to have been written by the Apostle James [or his followers] around the year 170. It tells us that Joachim and Anne were wealthy, but childless, and of course this made them sad. One day, Joachim decided to go out into the desert and fast for 40 days and 40 nights, in the hopes that God might answer his prayer for a child. Of course, men being men, Joachim went out into the desert without telling Anne, and so she found herself not only without a child, but without a husband, too. Eventually, an angel appeared to Anne and told her that Joachim was not dead and that she would soon bear a child. Anne was so happy, she vowed to dedicate her child to God, and when Mary was three, she was taken to the Temple and dedicated to God.

Aside from being parents to the Blessed Mother, don’t forget that Saints Joachim and Anne were also Jesus’ grandparents! Today, many grandparents look to them as examples of holiness. We can learn about them by looking at their daughter, Mary. Even as a young teenager, Mary’s faith was strong enough to enable her to make that fateful, and faithful, decision that changed the world forever. She believed that she was capable of making such a decision, and so she must have been confident. Yet the decision also indicated that she was humble enough to assent to God’s designs for her. Surely, today’s saints had a hand in raising her to be the woman who said yes to God.

Image of Church of St Anne by Berthold Werner from Wikimedia Commons.