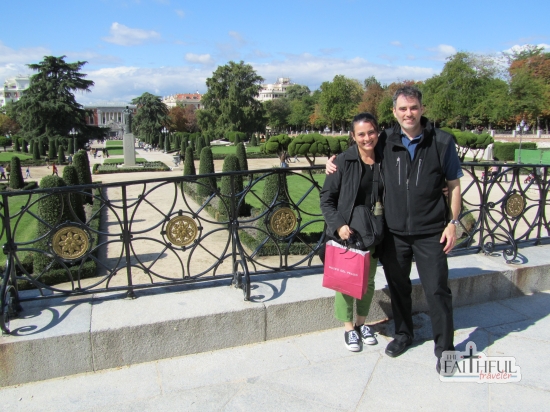 I’m taking a brief moment out of my Holy Land blogging recollections to let you know about some of my favorite travel accessories. Mostly because I can’t stand to be without them, even now that I’m home.

One of the absolute BIGGEST things I worry about every time I travel overseas is what kind of shoe to wear. I’m a walker. I like walking vacations. I don’t think I’ve ever taken a beach vacation (having grown up in San Diego, I find the beach to be an overrated opportunity to catch cancer and ingrain sand in every crevice imaginable). So the shoes I wear are essential.

I’ve worn a variety of goofy shoes in the past. Some make me cringe just thinking about them.

There was the time my Jack Purcells and I lived in London during law school, when I wore them everywhere. (I think I burned all of those pictures…) Jacks were my signature shoe when I lived in NYC, too. They would rip up my feet when I broke them in, sure, but soon, they’d conform and the world was my cute canvas oyster.

I also wore Jacks to the Poconos back in 2004, although, to be honest, we didn’t walk a ton on that trip.

(I used to work at the Gap and I loved this ugly, shapeless sweatshirt!)

For some bizarre reason, I wore BOOTS to Spain in 2010. They didn’t bother me, though. Maybe because I was thinner and felt pretty. I was invincible. When I took them to Spain again in 2013,  though, I was much heavier and they KILLED my feet. It might have been the insoles, but I think not.

Given the amount of walking you do on a pilgrimage to the Holy Land, the shoes you wear are REALLY important. In 2011, I  wore a pair of Skechers that weren’t too bad.

They were on their last legs, though, so I threw them out when I returned home and didn’t replace them.

The last time we went to Spain, I made the mistake of buying these flat Skechers:

They were no bueno.

This year, I bought the best shoes EVER:

The Oboz Sawtooth Low in Clover. If I sound like a commercial, it’s because I LOVE THESE SHOES and HIGHLY recommend them from personal experience! I wore them almost every day in the Holy Land this year, and we walked a LOT over a bunch of different kinds of terrain, too. My feet felt stable and comfy, never too hot or cold. Oh, and the green color just makes me happy. They also make high tops, for those with ankle issues. I considered getting those… Maybe next year!

The two days I wore different shoes in the Holy Land, I did so for “fashion” (not that anyone other than me noticed). On the day of the Bethlehem Mass, I wore my “trusty”  Jack’s. They betrayed me. I barely walked that day, and my feet killed me by the end. The day we went to President Shimon Peres’ house, I wore Børn flats. Ow. Of course, it didn’t help that we were running through the streets of Jerusalem beforehand, but still. At the end of both days, my feet were killing me. I was happy to put my Oboz on for the remainder of the trip. Now that I’m home, I can’t take them off. (They have holy dirt now.)

I have something to confess. I am a somewhat suspicious person. It’s not that I expect the worst of people. I just like to prepare for it in case they give it to me. This might come from having grown up in the ‘hood in San Diego.

I remember, once I was over at a friend’s house, and my mom called to find out when I’d be home (this was in the day back before cell phones). I told her and asked why she’d called. “Oh, just tell the police office at the end of the block thatyou live in our house.”

“Oh yes. Mister so-and-so down across the street was shot in his car. They’re waiting for the coroner now and have blocked off the street…”

Another time, when David and I were in Rome, and he insisted on wearing a fanny pack (don’t look at me), we were making our way down to some ruins and I spied two 13-year-old-looking girls coming our way, arm in arm. What I didn’t see was the piece of cardboard box they held in front of their arms. (They were concealing a box cutter, we later found out by reading Rick Steves.)

Don’t mess with a girl and her Rick Steves.

While I didn’t see the cardboard OR the cutting implement behind it, what I did see was two strangers walking toward me with purpose. I knew they had no business with me. I knew there were beggars a plenty in Rome, and I was in no mood to give them anything. So I loudly said “NO!” to them, in my best Italian accent.

“NO!” I shouted again, as David sort of glanced over.

Next thing I know, they were right next to me, still arm in arm. So I shoved one of the girls as hard as I could and, little things that they were, they flew.

Then they called me obscenities in Italian that I understood too well and had to laugh at. Fortunately, they didn’t cut David’s silly fanny pack. Or either of us.

Since then, I have been very wary about the kind of bag I carry wherever I am, and my head is always on swivel mode. Pickpockets are everywhere, even in the US. Bag snatchers are, too. I suppose one school of thought would argue to give them what they want so they can go away quickly and leave you in peace.  I don’t know. Maybe I’m too pugnacious for that.

Instead, I buy Pacsafe bags. This is my Metrosafe bag that I use everywhere I go, especially when I travel.

The thing I love about Pacsafe is that they have WIRE MESH sewn in through the layers of the bag AND the strap, so even girls with box cutters couldn’t cut it off of me. (They could try to cut me, but the bag is usually filled with something heavy, and I think fast.)

I also have the hip and shoulder bag in blue and I bought camera straps for each of my DSLRs.

With these tools, I feel confident that my things are safe. And they are comfy and cute. What more could a girl want in a travel bag? (I think they could pass well for a “man bag”, too, guys!)

Other than your shoes and bag, there are a few essentials that I certainly need to remember for the next time I travel. Here is a brief list:

That’s all I can think of now. Maybe, at some point, I’ll put up a whole page with tips and stuff, but I think for now, a blog post will do.

I’m going to try and post about my trip again before I go to EWTN on Wednesday for Life on the Rock. Pray for me, will you? I have a lot to do before then. (As always, huh?)