The second day of our Holy Land pilgrimage was probably the easiest, as we only had 3 places to go–and one was at the beach!

The day started off quickly. We had a spectacular breakfast at our gorgeous hotel, The Olive Tree Hotel in Jerusalem, and then we were off to Cana, just outside of Nazareth, where the married couples would renew their wedding vows at the Wedding Church.

Tradition holds that it was here, where Jesus performed his first miracle, at the request of his Mother, turning water into wine.

In the Fourth Century, Empress Helena, the mother of the Emperor Constantine, built a church here. The remains of this church were found in the 17th century, and the Franciscans began building the present church in 1879.

Here’s a cool fact about Cana. Did you know it was the hometown of the Apostle Bartholomew? I didn’t know that. 🙂

So, the day started off as sort of a blur. I think I was still getting my “sea legs”. We walked into the church and, as I remember, Cardinal Rigali had already begun the ceremony of the renewal of vows.

We wanted to get David and I renewing our vows on camera, and had it all planned out, but we got there late, and I didn’t know where Sonja was… it was a mess. But I figured we were there to renew our vows, so I just went ahead and did it. Fortunately, when the time came, Sony found us, and we got it on tape. Phew!

I particularly loved the beautiful painting above the tabernacle in the church.

Look at how Mary slightly bows before her Son. I love it! 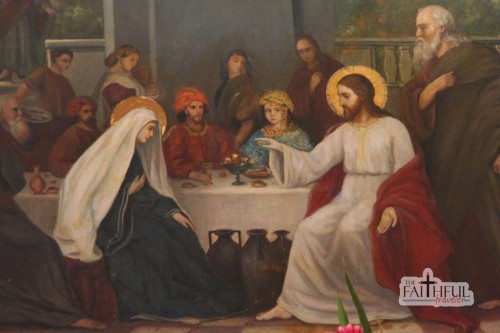 Renewing our vows was somewhat surreal. I mean, almost 8 years ago, I married this man in a small suburb of Philadelphia. And now, here we were, in Cana, no less!

Renewing our vows with the Archbishop of Philadelphia! AND, one of priests who originally married us, Monsignor Donald Leighton, was here in Cana with us, too! It was a full circle moment, as some say.

Here’s a pic from our original wedding, btw. Note Father (he wasn’t a monsignor yet) Leighton in the back (with our dear friend, Rev. Stephen Wang). 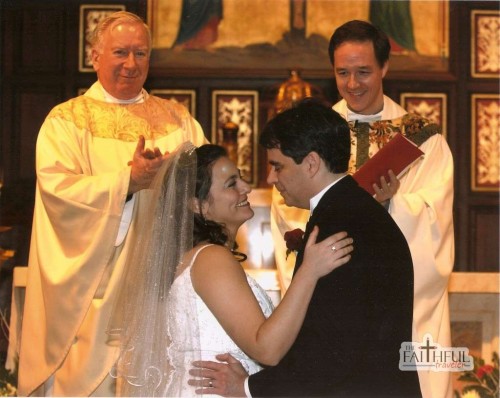 After the ceremony, we wandered around a bit, looking at the centuries-old foundations of the church, and taking some pix and video. Groups of tourists entered and left the church, and when we were finally ready to go, we walked outside and noticed that everyone from our pilgrimage was GONE! We walked down the hill, hoping to see our buses at the bottom, but no. Nothing.

It was one of my biggest fears–being left behind!

Fortunately, I had set up my phone to make international phone calls, so I called our tour leader and found out they were looking for us. My biggest regret: we didn’t get any video of it! We were in SUCH a panic, we didn’t think, “Hey! this would be REALLY funny to put into the show!”