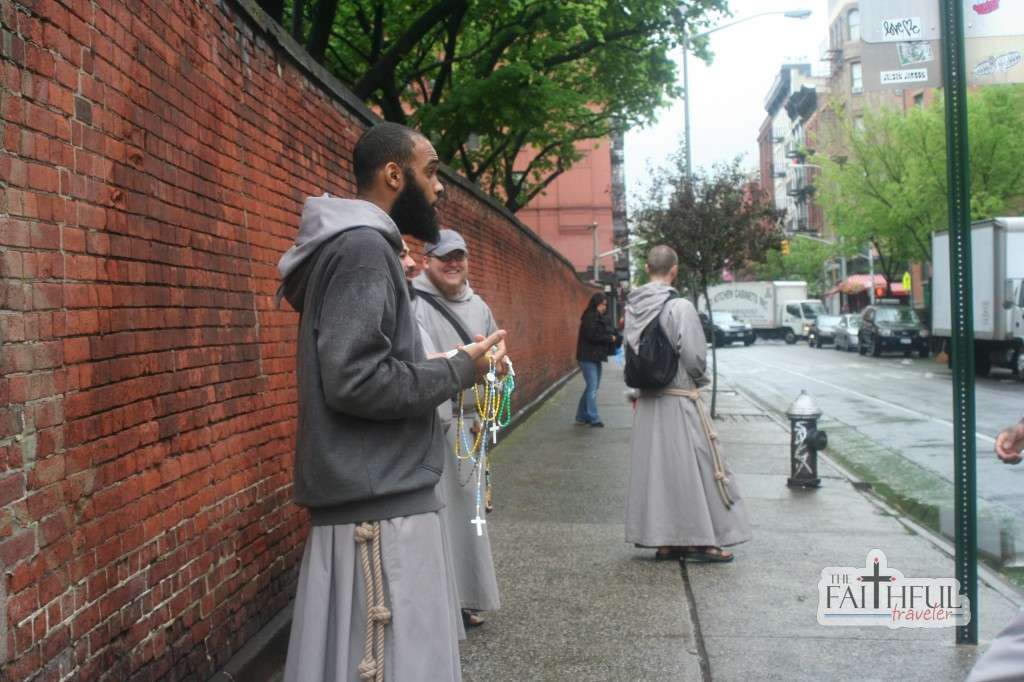 Yesterday, I was blessed with the opportunity to film the Franciscan Friars of the Renewal and the Sisters of Life as they handed out rosaries and information about the faith on the streets of New York City’s Little Italy. All this week, the friars are giving a mission at the cathedral—basically a series of talks and an opportunity to pray. If you live in NYC, I highly encourage you to go.

The members of both of these orders are so joyous, it was hard not to smile whenever I was with them. What a great way to evangelize—to show how happy you are to be Catholic. It’s no wonder that these orders are growing by leaps and bounds. I hope they continue to do so, and will definitely be adding them to my list of prayer intentions.

I had many opportunities to speak with a number of them during the day. They were all just so wonderful, and I thought, if only other people could see this—how “normal” they are, how beautiful they are, how so very much they are like non-religious members of today’s youth, and yet they chose God. They chose to devote their lives to Him. So many people—even Catholics, I think—have the misconception that people who enter religious life are society’s undesirables. People who couldn’t find someone to marry them, people who are running away from life, people who made the choice to devote their lives to God because their “normal” life was somehow defective. But you meet these people, and you have to see that that just isn’t true. At least, not with them. I pray to God that we can show that in The Faithful Traveler. I pray that people who need to see this will watch.

The other thing that struck me about yesterday’s event was its location. In the photo above, you see the friars handing out rosaries alongside the great wall of Old St. Patrick’s Cathedral. That’s actually Brother Pierre Toussaint with the rosaries in the photo above, which is doubly meaningful, considering the life of his namesake: a fabulous man with a fabulous story.

That wall was built back in the day to protect the cathedral and its people. In 1835, New York’s fourth bishop (later its first archbishop) John Hughes and members of the Ancient Order of Hibernians—neighborhood Irish Catholics—lined the wall to protect it from an anti-Catholic “nativist” mob intent on burning it down. They saved the cathedral that day. I can just see them up there, torches in hand, guns cocked, saying, “C’mon! Bring it!” What heroes.

As I stood along the wall yesterday, watching these young men and women hand out rosaries and encourage people to attend the mission, I thought, “They’re still fighting the same war!” Of course, the weapon they were wielding—the rosary—is so much more powerful than a gun. It was awesome to see them fighting the fight with love and smiles instead of guns and frowns. The reaction they got was interesting. Many people took photos of them. A few stopped to talk. Some just ignored them. Others stared. Apparently, I missed seeing David Bowie walk on by.

I’m so glad I was able to go yesterday. And now I have to change my script to include the day’s events—to show that Catholic life in New York City is not a thing of the past, but is alive and well.